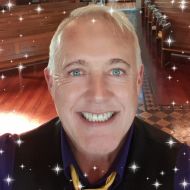 Hi everyone,
Gosh I've been a bit slack with this Blog.... (note to self in the future, update often lol)

2019 has come and gone, and what a busy year I have had with birthday parties, school holiday shows at Johnsonville Shopping Centre, Te Papa, The Mall Upper Hutt, Holiday Programmes, and countless events and Kindergartens and Childcare Centres.
I toured with my educational show taking it to Whanganui, Palmerston North, Hawkes Bay, and South Taranaki, which was well received.

Over the Summer Season I’ve been entertaining the children on The Interislander - “ARATERE“.
This is always a great contract and the staff really look after me. This season we had great sailings and it was lovely to meet some of the new staff as well as catch up with the old staff (if you pardon the pun lol).

I worked at the Tauherenikau races in Featherston on January 2nd and February 6th, Waitangi Day, a regular gig I’ve had for the past 20 years.

After that I did a stint across 23 libraries for The Summer Reading Programme, from Featherston through to Gisborne, performing a carnival themed show. This show was very well received by everyone. Following this I spent a weekend working at Splash Planet in Hastings, which is always fun.

When the children went back to school in February I had a few weeks off to relax and catch up with everything at home. I’m an avid gardener so I spent many hours in my lovely garden.

I received the feedback below from the Aratere last week which I’ve put out for you to see. As a performer it’s always nice to receive feedback.